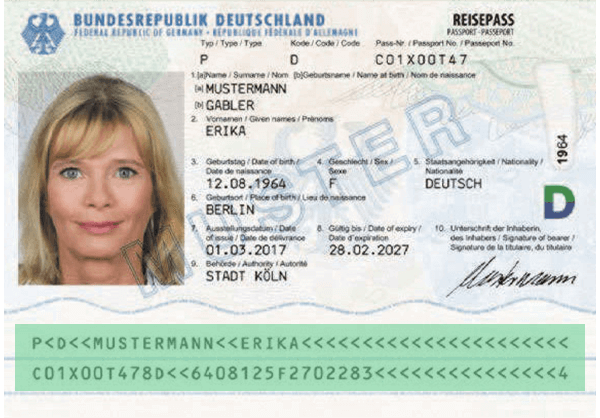 Digitize the data of a Machine Readable Zone (MRZ) with our secure, accurate and fast OCR and scanner solution. We believe that an image speaks more than a thousand words. Therefore, we included a three step example of how our MRZ OCR engine scans the MRZ and automatically extracts the data from this document.
Uploading the documentImage to textParsing to JSON

Step 1: scanning and uploading an image containing an MRZ to the OCR engine

First, you will have to provide us with a PDF or a picture of the identity document, which must contain an MRZ. This can be done both by sending it from a web application as well as from a mobile application. After you have done so, this image will automatically be skewed, cropped and converted into a usable format by the MRZ OCR solution.

Once the MRZ has been scanned and the PDF or the picture read and received, it is converted into a TXT file. All the text from the file is extracted, including the MRZ (see the bottom left of the image).

Step 3: getting JSON output from the API

In the final step of MRZ OCR, the Klippa Parser takes the TXT file which was gained in the previous step and converts this into structured JSON. Machine learning and MRZ parsing are used. The JSON is then returned as output from the API. From this point on, the MRZ data can easily be processed into your database. Additional data like the signature and the picture from the passport can optionally be scanned and recognized from the identity document.

What are the benefits of MRZ scanning?

Fraud
prevention
Automatic recognition of errors, fraud and duplicates.
Reduce cost
Spend less on processing of passports and other identity documents by using MRZ OCR.
Speed
improvement
Scan and process MRZ strings within seconds. Simplify the onboarding process and KYC of your company.
Reduce
errors
Prevention of manual data entry errors with our high quality data extraction MRZ solution.
Let's talk over the phone!
We love to explain more about Klippa via a short phone call. If you want us to call you back, just choose a date and time that suits you best. If you leave the date and time empty we will call you within 30 minutes!
We are available for calls in English, Spanish, French, German and Dutch during office hours (CEST timezone). You can reach us at +31 50 2111631.

Which fields can be extracted?

An MRZ consists of the name, document number, nationality, date of birth, gender and passport expiration date. Sometimes there is optional additional information. When reading MRZ these fields will be extracted and optionally the signatures and pictures can be extracted by our MRZ OCR solution:
Full Name
Nationality
Date of Birth
Gender
Expiration date
Document number
Machine Readable Zone (MRZ)

Our vision is to eliminate manual data entry. Therefore, manual processing of MRZs is coming to an end. Supported by the Klippa Scanner OCR SDK, the MRZ OCR can accurately and quickly capture personal data from identity documents. Scan and process bigger volumes of MRZs, avoid fraud and reduce errors.

Get a clear view of how Klippa can help make your MRZ processing more efficient. A demo takes just 30 minutes.

What does MRZ OCR cost?What is the MRZ code?What types of MRZ are there?Can Klippa process all types of MRZ with OCR?What are the use cases of MRZ OCR?How does Klippa check the validity of the MRZ?Is Klippa MRZ processing GDPR compliant?Is there documentation for the API?
The pricing structure for MRZ scanning recognition depends on the monthly document volumes. Both pay per use and monthly licenses are available. Get in contact with our solution architects to get an exact quote.
An MRZ is a coded zone that is used on identity documents like passports, ID cards and sometimes even driving licenses. MRZ stands for machine readable zone. It is an international standard (ICAO 9303) developed by governments, customs offices and airlines. It is a way of securely compacting identity document information into a coded string of characters that a computer system or smartphone camera can read. Almost all passports are nowadays fitted with an MRZ.
An MRZ consists of two or three strings of characters, checksum numbers and separators on the front of passports or the backside of ID cards. For the string a special font called OCR-B is used. This font is specifically developed to make it easier for computers to read and prevent reading errors as much as possible. The checksum numbers are used to validate the extracted data that is in the MRZ and is a safety measure against fraude.
There are three types of MRZ, called MRZ 1, MRZ 2 and MRZ 3. Passports are usually fitted with Type 3 and ID cards with Type 1. The Type 3 MRZ consists of two lines of each 44 characters long and consists of name, passport number, nationality, data of birth, sex and expiration data. Sometimes additional data can be added. Only A-Z and 0-9 characters are included in the MRZ and the separator. The Type 2 format is not commonly used, but spans two lines of 36 characters long. The Type 2 only consists of A-Z and 0-9 characters next to the separator. The Type 1 format spans three lines and each line is 30 characters long. Also in the Type 1 only A-Z and 0-9 are included, next to the separator. Klippa’s MRZ OCR works an all types of MRZs.
Yes, Klippa can extract and validate all three types or MRZ strings on passports, ID cards and other travel documents.
Any use case where large amounts of identity documents have to be processed to extract information such as the name, date of birth, nationality, document number, valid through and more can benefit from MRZ OCR. Many times these are cases with regards to identity validation, customer onboarding or KYC.
MRZ strings are available in three structures: Type 1, Type 2 and Type 3. Klippa only accepts MRZs that have the correct structure, font and length to ensure validity. Next to the structure we validate the content of the MRZ by checking if it consists of only A-Z and 0-9 and separators. MRZ strings contain checksums to validate the extracted data. Klippa uses these checksums to ensure that the MRZ are valid and accurate.
All the services that we offer are fully GDPR compliant, as well as MRZ OCR. For processing, we only use ISO certified servers within the EU and a data processor agreement is in place. We do not store any of your or your customers’ data.
Additionally, Klippa provides an option to mask sensitive data. You can read more about that on our data masking blog.
At Klippa, we understand the value of a well documented API. The documentation about the MRZ OCR is created using SWAGGER and can be found via this link.
Questions?
Please feel free to ask all your questions.
Get in touch by mail, phone or chat!
Contact us
+31 50 2111631
Financial documents
ReceiptsInvoicesPurchase ordersDebit & credit cardsPayslipsVAT statementsTax statementsBank statementsCredit card statementsP&L statementsBalance sheetsSEPA authorizationRemittance advice
Identity documents
PassportsID cardsDriving licensesResidence permitsMRZ scanningStudent ID card
Legal documents
ContractsPermitsBylawsChamber of commerce
Logistics documents
T1 / T2 documentsCMR WaybillBill of ladingCustoms formsCertificate of originDangerous goods declarationDelivery docketPacking slipShipping LabelsProof of Delivery (POD)Advance Shipping Notice (ASN)Certificate of inspectionFBL (FIATA Bill of Lading)
HR documents
Resumes (CV)Motivational lettersEmployer statement
Medical documents
Health insurance cardsMedical prescriptions
Other
Proof of residenceProof of employmentPrice tagsMenu cardsLicense platesWork ordersUtility metersCar titles
Single data fields
VINTINSerial numbersSocial security numbersEAN codesBarcodesQR codesCoC numbersVAT numbersIBAN & bank account numbersBIC codesInvoice line items / products categoriesReceipt line items / products categories
Works with AZEXO page builder
We use cookies to ensure that we give you the best experience on our website. If you continue to use this site we will assume that you are happy with it.OkNoPrivacy policy